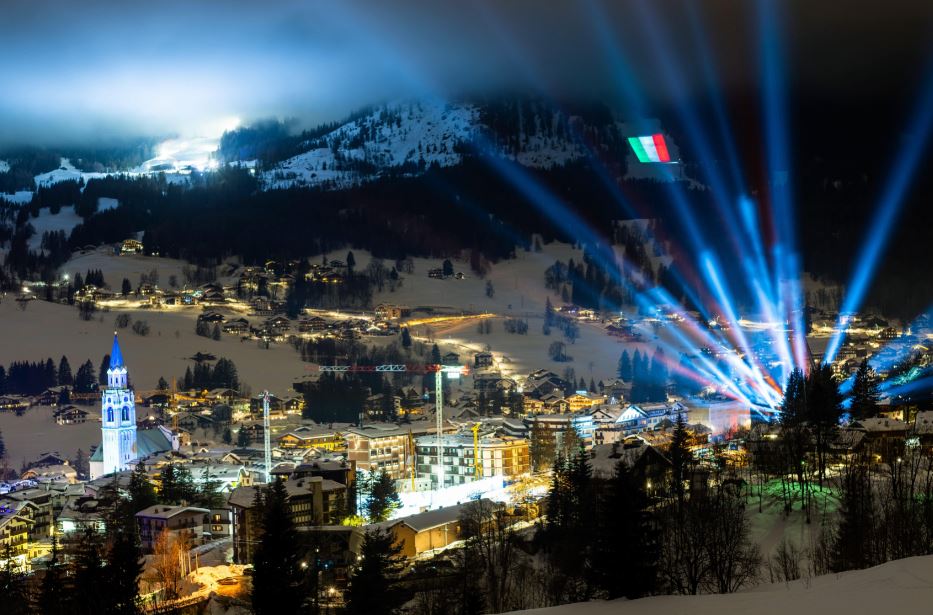 The intangible value of the first live event in the pandemic era: the S-ROI of the Cortina 2021 Opening Ceremony

When resources invested generate a positive – psycho-social, economic and environmental – return with a knock-on effect from the local context to the national reality

19 April 2021, Rome – After one year without live events the first world phygital event was held on the whiteness of one the most renowned international ski resorts. The Opening Ceremony of the Cortina 2021 Alpine World Ski Championships, commissioned by Fondazione Cortina 2021 and carried out with the contribution of the Government – Sports Department, made full use of the physical and digital modes earning a place in the new scenario of Covid-proof events.

By integrating the features of a physical event with the potential of a digital event we have created a live experience that could only be accessed remotely.

This was the debut of this kind of events in a sector that is still largely unexplored and that may offer unexpected outcomes.

The university spin-off Sigma NL of the University of Genoa carried out an ad-hoc study on the environmental, social and economic impact using the Social ROI with interviews before and after the event that contributed to highlight the innovative scope and the quality of the ceremony.

Public Administrations, banks and financing bodies are increasingly requesting this type of assessment that it is used to show intangible elements that would not be included in the balance sheet of the producer, but which constitute the prevailing elements of a process involving several categories of players.

“The Social-ROI makes it possible to assess the income effect, allied activities and wellbeing generated by an event, its positive and negative externalities and the change that it has on people’s habits”, says Giovanni Lombardo, professor of Methods and techniques for data analysis and CEO of the innovative start-up Sigma NL s.r.l. a spin-off of the University of Genoa. “Moreover, in the case of the Opening Ceremony of the World Ski Championships in Cortina it was a groundbreaking calculation. After many months of interruption, resuming the organization of outdoor shows together with the possibility for spectators to experience remotely emotions similar to those typical of a ceremony attended in person, has provided a strong signal to the artistic sector and to the public. The calculation is so significant that it can be estimated that, for every euro invested in the ceremony, almost 4 euros were obtained, in psychological terms, of allied activities and of change in the propensity to consume and of the experiences offered by the mountains in terms of sports and tourism.”

“The generation of a S-ROI of 1:3.74 is an exceptional figure considering the nature of the event. Our starting point was an unprecedented situation. We have run a huge risk, but it was worth it for Cortina, for Veneto and for Italy that has proved to be able to deal with an extremely complex situation”, declares Maria Criscuolo, chairwoman of Triumph Group International.

Figures are positive and speak for themselves. The desire to restart operations is strong, there is great openness towards new solutions, and we are ready for events that consider sustainability as a priority.

Thanks to the adoption of the “bubble” system and of significant prevention measures, the event was held focusing on guaranteeing safety and health protection for everyone, with the participation of about 300 artists on stage.

For 66.23% of the respondents the emotional return was the same as if they were attending a live physical event, this was the figure at the end of the event, compared to 47.46% recorded in pre-event interviews.

the percentage recorded in the interviews was 89.75% before the event and it went up to 95.12% in the post-event interviews.

Data relating to the quantification of perceived stress also show a reduction in the level of concern recorded before and after the ceremony going down from 56.96% to 46.72%.

“We managed to convey the emotions of an in-person event also to people who were watching it remotely: a double first time for a World Ski Championship: a great sport event and a phygital opening ceremony! Sport, creativity and innovation were celebrated in Cortina” states Valerio Giacobbi, CEO of Fondazione Cortina 2021.

The calculation monitored the community viewpoint with the aim of improving the visibility of the territory and enhancing the natural capital of the Dolomites, by analyzing actions and activities related to the World Ski Championships. Also from this viewpoint, positive effects and externalities were highlighted: according to 83% of respondents among local inhabitants and entrepreneurs the event represents the start of the operational recovery of local economic activities. Moreover, according to 85% of the same sample, the event was an opportunity to show alternative activities to skiing in the mountains to spectators, transforming them into prospective tourists.

“At the opening ceremony I welcomed the Alpine World Ski Championships in Cortina as the world championships of the restart. This was confirmed by the success of this first major sporting event in the pandemic era: with a great institutional and organizational teamwork we have proven that life after Covid can start again. Cortina 2021 has had extraordinary fall-out effects, just think of the return in terms of image and visibility in 190 countries connected worldwide. Furthermore, the synergies in the area have attracted new investors with whom to create a cutting-edge tourist and housing offer in compliance with environmental sustainability so as to make Cortina a resort that can be visited in every season and with a “360-degree” approach.

The Municipality of Cortina believes and invests in these development opportunities and looks forward with determination to the 2026 Milan-Cortina Winter Olympic Games” continues the mayor of Cortina d’Ampezzo, Giampiero Ghedina.

The analysis carried out took account also of the parameters of environmental pollution prevented as well as those that it was necessary to generate. Contrary to expectations, digital solutions imply a form of pollution as well. One hour of streaming in Italy pollutes about 0.08 kg of CO2. Considering a 75-minute duration and the energy consumption for the carrying out the ceremony, it was possible to estimate, conservatively, about 280 tons of CO2 produced to watch the event from home. This was largely buffered by the organization of the sporting event in its entirety by applying good daily practices such as food recovery, the collection of sorted materials that reached 79.7% up to offsetting CO2 emissions by joining the Blue Valley project.

The president of Fondazione Cortina 2021, Alessandro Benetton comments: “We are pleased with this further acknowledgement coming from the academic world on the elements of excellence of the World Ski Championships organized by Italy, the opening ceremony under the rain and then the snow of February 7 has offered to the tens of millions of people who watched it, enchanting images and emotions that have shown to millions of people the best version of Italy that has proven to know how to team up, to deal with difficulties and to look to the future with confidence”.